How Much of a Difference do You Make? 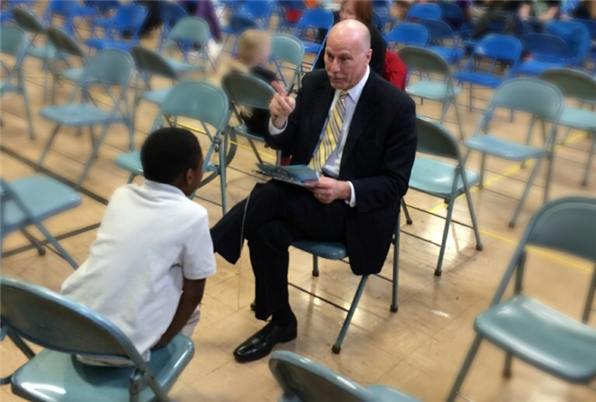 Have you ever wanted to make a difference in someone’s life and didn’t know how to do it? For most of us that answer is YES. On March 5th, a simple volunteer opportunity afforded Kevin Greaser, Cape Girardeau’s Community Bank President of Alliance Bank, that break.

Alma Schrader School is the “Adopted School partner” for Alliance Bank. (A program through the Cape Girardeau Chamber of Commerce.) They were seeking volunteers to test – tutor – design questions – and simply help at their Knowledge-A-Thon (KAT). This big project (sponsored by the PTO) is the school’s largest fundraiser and Alliance Bank wanted to support the event.

The Alliance Bank volunteers were assigned as tutors. Kevin was placed with a young 2nd grade boy and he spent about 60 minutes prepping the student for the next level of questioning. Of course, being a tutor you have the answers, and that was good… “School has gotten a little harder than when I attended,” said Kevin. Even asking the simplest of questions allowed Kevin to get to know the little guy. In just that short time Kevin and the student were doing high fives and they really bonded.

At the end of the day the student was thrilled to be finished with the tutoring and testing, however … they had ran out of the rewards — there were no ice cream certificates left for him. The student was brokenhearted and so was Kevin.

Kevin wouldn’t stand for the student to miss out on the incentive that meant so much to him. That’s when the real feeling of making a difference came over Kevin. Kevin wondered how he could make it up to the student.

The next day Kevin dropped off some Dairy Queen Dilly Bar coupons to Ms. Unnerstall (school counselor) for the student. Below is what Ms. Unnerstall shared:

As he was leaving he again expressed his shock and happiness, and then said maybe he should share a coupon with someone in his family. What a good heart! I told him they were for him, but he could make the choice and share one if he wanted. He smiled and left my office…on cloud nine.

Thank you again! I’m so glad this was a great experience for you, as it was for him.

This student was in total disbelief that anyone would think of going that extra step. Of course, taking that extra step is not uncommon from Kevin. And this time the payback was immense. The day Kevin spent with this student will be remembered by both for years to come. Volunteering is very rewarding! Get involved with an organization in your local community. MAKE A DIFFERENCE!!